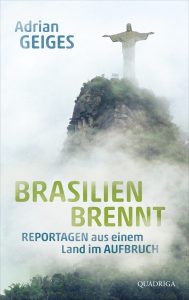 Brazil is more than football and carnival. It is an awakening giant, and it is a wonderful country.

Many people fail to see the rise of Brazil as a new giant. As the fifth-largest country on earth, multicultural, rich with resources, young and dynamic, Brazil is in the process of overcoming its paralyzing past. The awakening is strong, and so are the inner tensions.

Adrian Geiges, a foreign correspondent for many years, lives in Brazil among ordinary people, sharing their daily life. His reporting is full of sympathy, guiding the reader through the vibrant life of this country. In a mix of big topics and personal stories, Geiges puts a human face on this country.

The journalist Adrian Geiges reported from China and Russia for many years. Now, he lives in Brazil, maybe the most exciting among the emerging countries. He wants to get acquainted with it from the inside and report about it at first hand.
In his new book, “Brazil is Burning”, Adrian Geiges offers a first hand view: Geiges has been living in a favela in Rio de Janeiro. He spent time with native people in their longhouses in the Amazon region. He met former drug gangsters, reported on a brutal ritual murder of a former child soldier, and visited an assembly line at the Volkswagen factory in São Paulo. In the middle of the jungle, he interviewed Glenn Greenwald, the associate of Edward Snowden. Geiges presents two countries in one: On the one hand, there are drug gangs, inflation, and corruption. On the other hand, there is the resistance to life’s hardships, the limitless joy of life and a growing self-confidence of the younger generation. Here in Brazil, South America is reinventing its future. Adrian Geiges lives among ordinary people and shares their daily life. Rarely have readers the chance to learn about this country and its people so intimately and close-up. Brazil is a country in which history is made, and it is its people that are moving it forward in a breathtaking speed. By joining Adrian’s adventures, and reading this book, you have the good fortune to also live among the Brazilians.