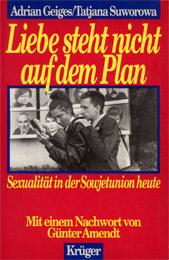 Love Is Not on the State Plan

The first authentic investigation: Sexuality in the Soviet Union. In frank talks with young women and men the authors show the effects of the changing society on the people and their personal relations. Love, sex and perestroika – an insight into the everyday life in the Soviet Union.

“This book is about the still existing unequality of man and women, about sexist behaviour of Soviet men and the intolerance against everything which differs from the norm. But Adrian Geiges and Tatyana Suvorova also write about the resistance especially of women against these old norms. Their report is the first investigation of the sexual state of the Soviet society after decades of moral stagnation.”
Günter Amendt in his epilogue to the book

“The beds are governed by frustration. A Moscow female journalist and her West German male colleague wanted to know whether the perestroika has changed the sex life of the Soviet people. Result: The old prudery continues.”
Katja Gloger, Stern

“The book not only names the puritanic, legal and official taboos, but also asks what stands behind them… Adrian Geiges and Tatyana Suvorava succeeded in the nearly impossible, because each time when they visited a factory, a school, an institute or a ministry, they first had to break a hole into the wall of the ‘responsible comrades’ through signatures, stamps and telephone approval. But after they succeeded getting past the bureaucrats, they met open people. The young women and men replied willingly and sincerely.”
Vladimir Pylyov, Moscow News