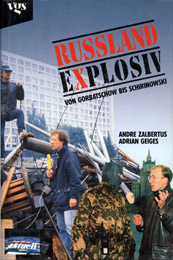 Russia after the breakdown of the Soviet Union: Drunken red armists near St. Petersburg drive around with atomic missiles. The TV reporters succeed without problem in smuggling nuclear material out of a factory. In Rostov at the river Don a serial killer is on trial live on TV. A children’s mafia controls the streets of Moscow… In addition to bizarre scenes of Russian life at that time Adrian Geiges and Andre Zalbertus describe the political events – from two coup d’etats, which they covered from the centre of the fighting, to the bloody conflicts in the Caucasus.

“The book is interesting, because curious young journalists describe first hand a changing world. And it is thrilling, because excellent writing and a clear structure make the reading easy.”
West German General Newspaper

“It catapults me into the world of flowing borders between politics, war and crime.”
Book Market