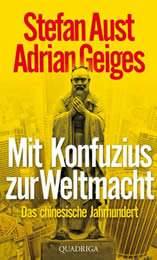 With Confucius to World Power

The contrast couldn’t be greater: in Stuttgart enraged citizens protest against the construction of a railway station which has been in planning for 15 years; the Chinese jump-start whole megacities in the same time. In Berlin schools descend into chaos, whilst Shanghai achieves first place in the Programme for International Student Assessment (PISA). The formula for success was developed by a man who died 2500 years ago: Confucius. He promoted learning and discipline, which is exactly what counts in the todays global competition. During the cultural revolution his followers were persecuted. Now his ideas are celebrating a comeback in China.

This book investigates the Chinese phenomenon, which will determine the outcome of the 21st century. For their exciting report the authors travelled to the biggest city in the world and to the Three Gorges Dam, visited Confucius Schools in Beijing and Hamburg, talked to Chinese leaders, thinkers and superstars. They examine Chinas leadership transition in 2012 and the growing influence of microblogs, as apparent in the discussion surrounding the collision of two high-speed trains near Wenzhou and the death of a two-year-old girl in Foshan.

China on the Ascent, the West on the Descent

From Keeper of a Granary to World Philosopher – Confucius Career

The New Policy of the Communists: Harmony instead of Class Struggle

Operation Gold – How China Is Winning in Sports

In Space the Last Will Be the First

The Missionaries of Confucius in Europe

Get Rich with Confucius

Afghanistan – Grave of Two Superpowers, Birthplace of the Next

The Biggest City in the World

What the West Can Learn from Confucius