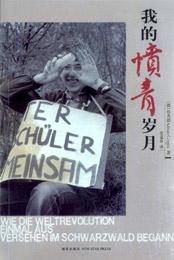 From communist to TV reporter to CEO in China: An adventurer of his generation tells his unbelievable story.

Thin shoulders, blue corduroy trousers, cheap glasses, long hair, good middle-school student, non-smoker, shy – and nevertheless Adrian Geiges is feared in the cosy Black Forest town of Staufen as a rebel. Why? He is a member of the youth organization of the German Communist Party. Active in the peace movement and firm in the theories of Mao, Marx and Lenin, he dreams about leaving bourgeois existence behind and starting a new life as a professional revolutionary. When the party sends him one year to a secret cadre school in East Germany, he gets acquainted with the dialectic of the socialist reality: singing revolutionary songs, strange prohibitions, and even communist sexual morality. With enthusiasm he starts his long march to change the world – but instead he himself changes like the world around him: As a tabloid TV reporter he looks for sensations in the Moscow red light areas, becomes a tough boss of an international corporation in China and enjoys the company of Shanghai beauties.