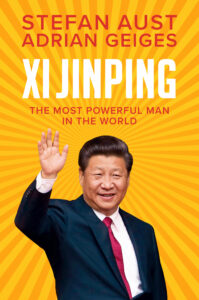 Xi Jinping: The Most Powerful Man in the World

If China seems unstoppable, so too does its leader Xi Jinping. As General Secretary of the Chinese Communist Party and President of China, he commands over 1.4 billion people, in a vast country that spans the prosperous megacities of Beijing and Shanghai and desperately poor rural regions where families still struggle with malnutrition.

Today, Xi Jinping faces a series of monumental challenges that would make other global leaders tremble: a trade war with the USA, political unrest in Hong Kong, accusations of genocide in Xinjiang, stuttering economic growth and a devastating global pandemic that originated inside China.

But who is Xi Jinping and what does he really want? To rejuvenate China and bring economic prosperity to all its people? To challenge American supremacy and turn China into the world’s dominant power? Avoiding both sycophantic flattery and outright condemnation, this new biography by Stefan Aust and Adrian Geiges gets inside the head of one of the world’s most mysterious leaders. Skilfully unravelling the hidden story of Xi Jinping’s life and career, from his early childhood to his rise to the pinnacles of the Party and the State, they flesh out his views and uncover how he became the most powerful man in the world.

This biography of China’s leader will be indispensable for anyone interested in China and where it is heading.

‘This book about Xi Jinping is an original account of the current political condition in China and the trajectory of this political figure of our time. Enriched by authentic details, it tells an untellable story that is grand in scope. Both the book’s starting point and its development are interesting and engaging. It traces historical happenings, conveys the characteristics of our time, and demonstrates the authors’ in-depth understanding of the subject matter. This depth in the individualized narrative is most needed when we look at politics and history.’
Ai Weiwei

‘While the US and Europe focus on the threat posed by Vladimir Putin, their bigger challenge comes from Xi Jinping. But what drives the Chinese president? In this wide-ranging book, journalists Aust and Geiges consider this question by exploring the strengths and weaknesses of the man behind the personality cult. A useful primer on a figure who will shape all our futures.’
Jonathan Watts, former East Asia correspondent for the Guardian and president of the Foreign Correspondents’ Club of China

1 Who Cares If a Sack of Rice Falls over in China?

Since the emergence of Covid-19, we know that we all should

From Chinese nightmare to Chinese dream

3 A Colourful Character in a Uniform Crowd

4 The Fight against Corruption

How to combine what does not belong together

Xi Jinping’s China: between a bright digital future and an Orwellian surveillance state

8 The Dalai Lama and the Uyghurs

How friends of the Xi family became their enemies

The trade war and the troubled relationship with the US

The other, democratic China

13 Will the Whole World Benefit from the Chinese Dream?

From Chinese nightmare to Chinese dream

Stefan Aust is the former editor-in-chief of Germany’s leading news magazine Der Spiegel and the author of numerous bestselling books including The Baader-Meinhof Complex.

Adrian Geiges is the long-standing Beijing correspondent of the weekly news magazine Stern. Previously he worked as a television reporter for Spiegel TV and RTL in Moscow and New York.